Basic tutorial: running the Rascal off a battery

Usually, the Rascal runs off a small power supply that converts wall power to 9 V DC. From there, the Rascal has four voltage regulators:

Because the Rascal has onboard regulation, it can run from a range of voltages. As the battery voltage drops, the Rascal becomes more likely to shut down. The nominal threshold where we start getting into trouble is 7.0 V. The maximum voltage that the Rascal can withstand is nominally 35 V, but I haven't tested it above 15 V or so.

I did an experiment where I attached a Rascal to a adjustable power supply to simulate a battery. I gradually lowered the voltage until the Rascal died. The results are in the graph below. 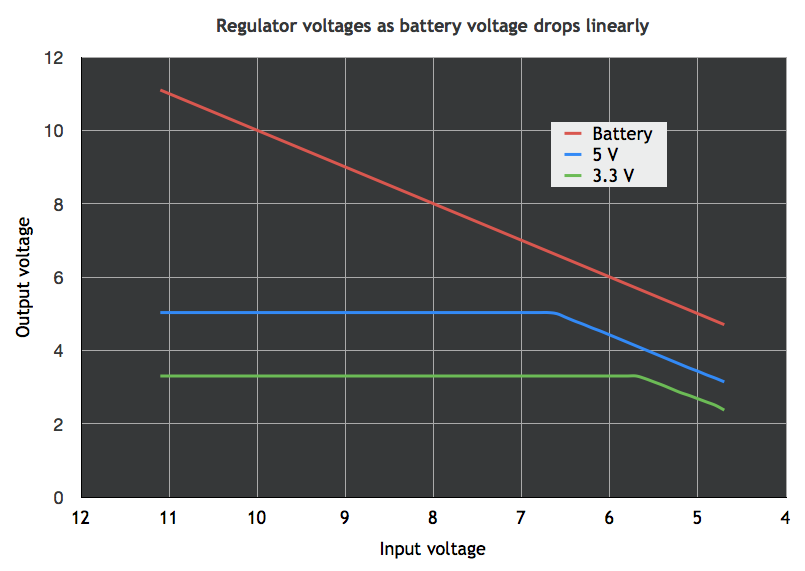 Details about when the Rascal went off into the weeds

There are several battery chemistries available today, but the most popular for small electronics is lithium polymer, or lipo. Each individual lipo cell has a voltage of around 3.7 V; the Rascal works best with batteries that have two cells in series ("2S batteries"), as their total voltage is 7.4 V. Higher voltage batteries will also work, but less efficiently, because the regulator on the Rascal dumps everything above 5 V. This makes 7.4 V is the best choice.

The Rascal draws around 140 mA when idle, but can draw up to 250 mA when it's booting. For comparison, this is 2-3x less than a Beagleboard, but 2-3x more than an Arduino.

Lipo batteries are available from a place like Hobby King. All the batteries that they sell have vastly more current capability than the Rascal needs. I've been testing out batteries from Hobby King. I'd estimate that the Turnigy 3300 mAh battery will run the Rascal for around 24 hours; it costs about $17. More details will appear here when the tests are complete.