One of the early Rascal customers was the Massachusetts General Hospital Learning Lab. The Learning Lab has been developing an attendance tracking system using 125 kHz RFID cards. In their current system, each card reader talks to an Arduino microcontroller using the Wiegand protocol; the Arduino talks to a PC over a USB cable; and the PC talks over the local network a database server to determine whether a card is valid or not.

The folks at the Learning Lab wanted to replace the PC and the Arduino with a Rascal, so I offered to help them interface their Wiegand card reader with the Rascal. For testing purposes, I got a cheap Wiegand protocol card reader off of Ebay. A little googling revealed that a gentleman by the name of Mark Jason Anderson had already written a Linux driver for Wiegand card readers. He used some CPU-specific kernel functions in his code, but luckily he was using the same Atmel AT91SAM9G20 processor that I use for the Rascal. I forked his wiegand-linux repository to my own on Github and modified the code slightly to use pins that the Rascal breaks out to its Arduino headers. I was able to build the kernel driver with the same cross-compiler I use for the Rascal kernel. The details of setting up the ARM cross-compiler are covered in the Rascal build guide.

There was one other challenge-- the card reader idles at 5 V, but the Rascal expects 3.3 V on its inputs. To scale the voltage down, I used a circuit not unlike the 2x voltage divider on the Sparkfun level shifter. The picture below shows the circuit. I used 4.64k and 9.09k resistors to scale the voltage down. In theory, this would reduce a 5 V signal to 3.31 V; I measured it at 3.29 V, so it was pretty close. I suspect that a 5k and 10k resistor would work fine, but I found the other values in my bins first. 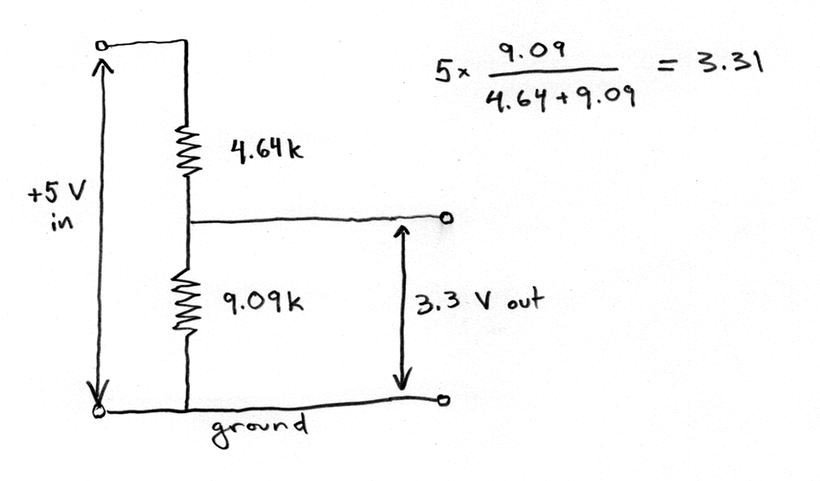 The earlier kernel driver build provided me with a driver binary called wiegand-linux.ko. I copied that to the Rascal. For testing, I was able to insert it into the running kernel like this:

After this, the following shows up in dmesg:

To make the kernel load on boot, the binary should be moved into /lib/modules/2.6.36+/ and the full filename, wiegand-gpio.ko, added to /etc/modules.

When a card is held next to the card reader, it beeps, the diamond flashes green, and we see new text in dmesg.

The new card data is also available from /sys/kernel/wiegand/read.

In the long run, I'd like the RFID reader to display some confirmation that it's working properly on a display, so I hooked up a 4D Systems LCD that I had from a different project. Here's the whole assemblage. 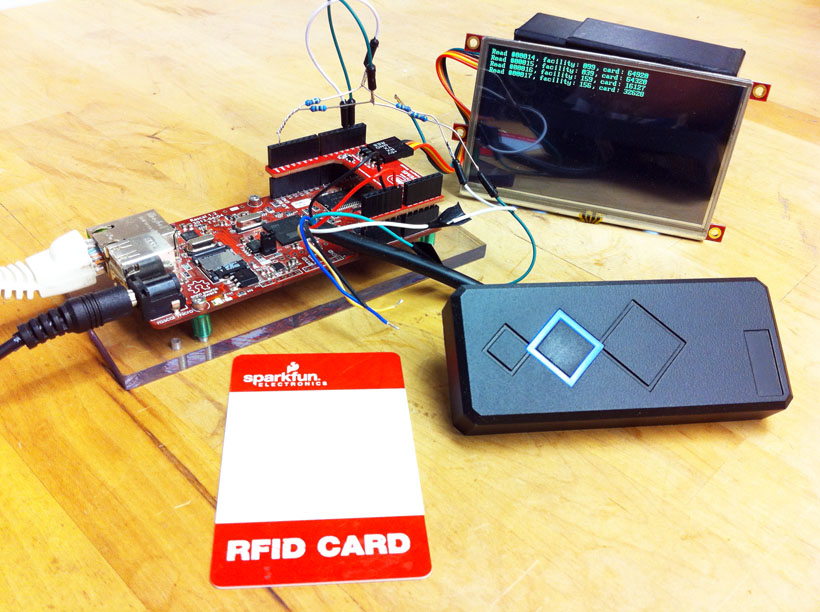 The last step is to pull data from /sys/kernel/wiegand/read and display it on an LCD. (Of course, the Rascal should also do something useful like unlock a door or log the card number to a database, but this is just a demo.) I wrote a short RFID monitoring Python script that does this on the Rascal. It would be nice to use the Rascal's Python server, uWSGI, to watch for new cards and trigger the Python so a second script wouldn't be needed, but that would mean writing a libudev plugin for uWSGI. I might do that eventually, but for now, this works fine. If you take a close look at the LCD in the picture above, you can see data from the few test RFID cards that I have.