The storyhouse, an interactive dollhouse for telling stories

There's a Rascal customer (let's call him "Justin") in Arlington, MA, USA, who has been building his young daughter a dollhouse over the last year or so. At some point, Justin decided that he would like to add lights to the dollhouse and control them from his iPad. The Rascal is the perfect tool for the job. He was able to wire the Rascal to a series of MinM smart LEDs and control them immediately with the BlinkM demo on the Rascal. Dealing with wiring the dollhouse with copper tape under the wallpaper has proved challenging, but in any case, it got me thinking about dollhouses.

What are dollhouses for?

People build and play with dollhouses for different reasons. For some, designing and building the dollhouse is the fun part. Some kids don't care about building at all; they just use them as the setting for tea parties or other kinds of imaginative play. "Dollhouses are for burning," says my friend Dan Beyer.

When I was a kid, I had an electric train set. I spent a lot of time flipping through Model Railroader magazine and wishing I had the resources, patience, and skills to build miniature railroad trestles. But most of the time I spent with the train set was actually spent telling stories. I would set up little scenes, usually involving a train, some small men, a helicopter, and a Batmobile (mostly hostage scenarios). Then, I would tell myself a story about how someone had been kidnapped in a helicopter, and now Batman was going to apprehend the villains. The stories never got very far, in part because the helipad wasn't accessible from the roads in the trainset, and the ground clearance on the Batmobile of the 70's didn't allow for offroading. But also, I didn't care about the outcome of the stories; I cared about setting up an exciting scene from them. This is the idea behind the storyhouse: it's a dollhouse with a Rascal embedded in it that kids and parents can use to tell stories.

With a storyhouse, you sit in a dark room with your kid and tell stories together. On the first level, the iPad lets you control the lights in the house. If you want to get more advanced, you can write stories in the Rascal editor and save them on the Rascal. Like a pop-up book that has a different moving feature on each page, each page of your story can have a different button or knob that controls something in the storyhouse. I'm not sure of the details of how it will work, but the idea is that the storyhouse is a miniature stage for a play that you are directing with your kid.

The dark room gives you a mood of intimacy, where the rest of the world fades away. I spent a few summers as a camp counselor, and I can attest first hand that that if you gather a bunch of kids in a circle and put a candle in the middle, they suddenly drop the fronts they wear all day. Two kids who were telling each other to shut up, no you shut up, all day start listening to each other and talking thoughtfully. I'm hoping that the storyhouse will have the same effect.

The pictures below show the first version of the storyhouse, which is really more of a proof of concept than an actual prototype. Inspired by Justin's dollhouse, I quickly assembled it in the Artisan's Asylum woodshop to see if the idea was worth pursuing. The next prototype will probably have 3 floors, more windows, and more lights, but this was enough to get started. It turns out that the lighting isn't really much fun unless the room is dark. Also, the storyhouse needs internal walls so that the lights have something to bounce off. 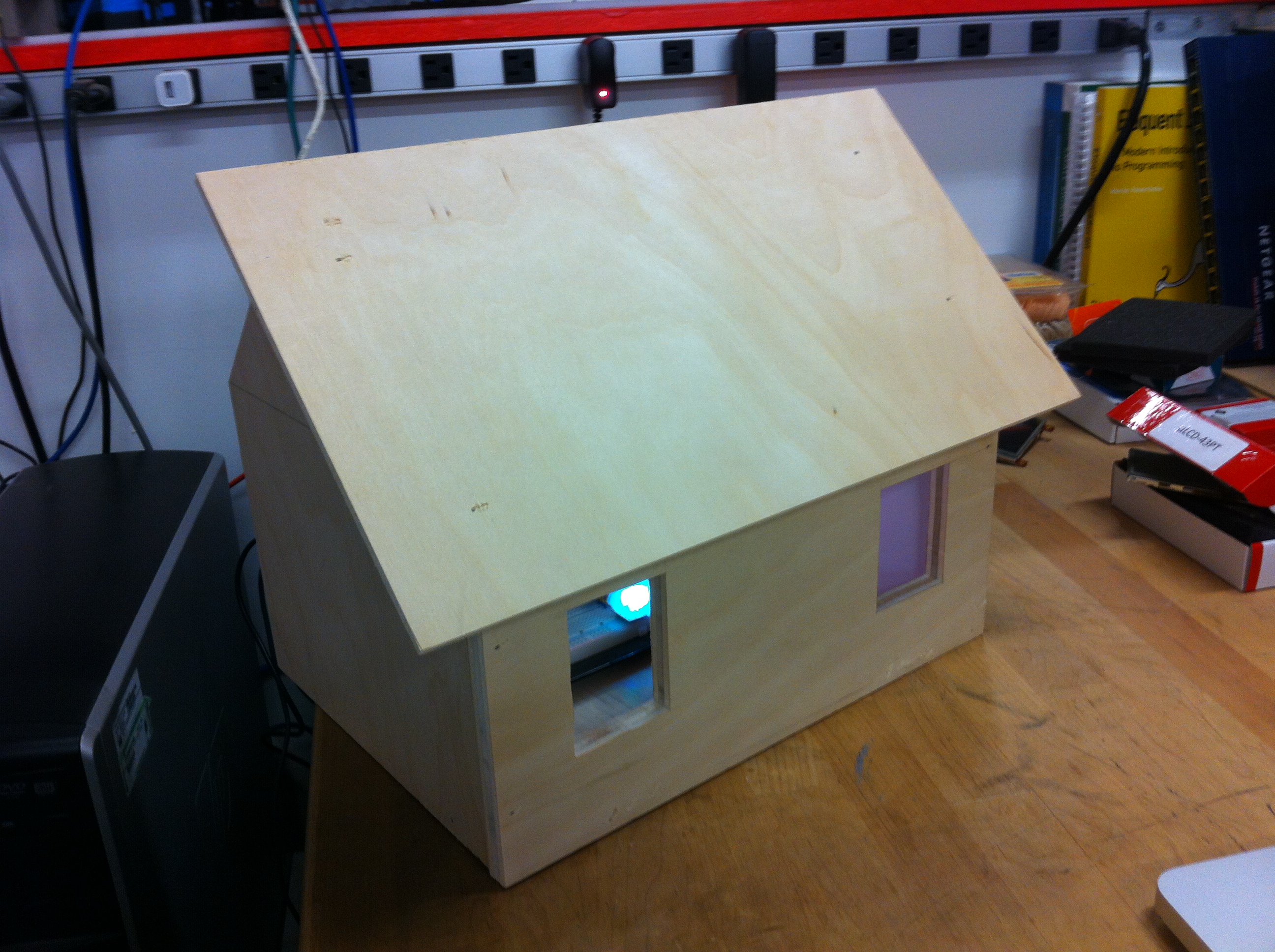 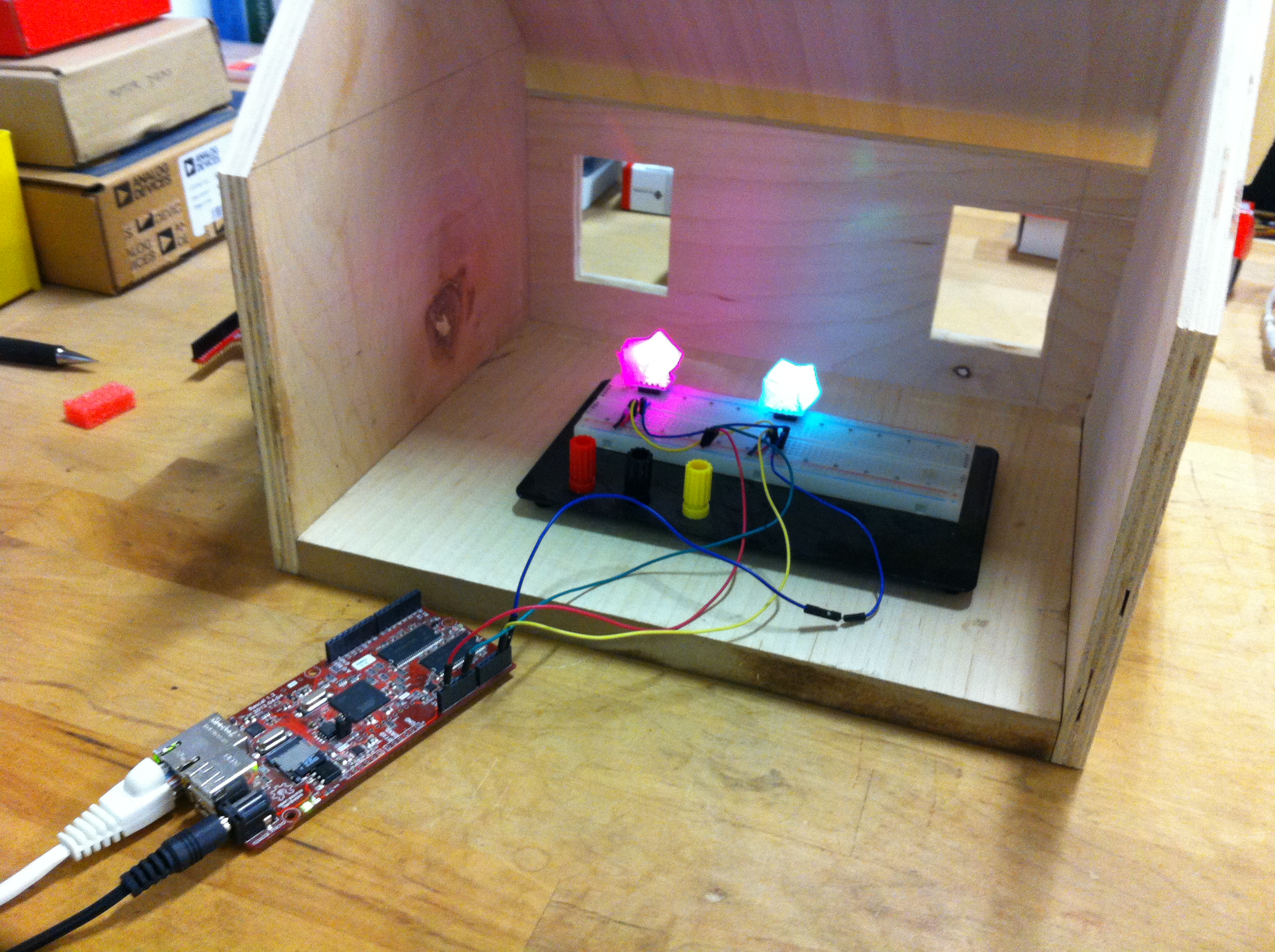 What kind of imagining do you want?

To my mind, the kind of unconstrained, imaginative storytelling that works with a storyhouse is totally different than what happens when you play with modern, hyper-realistic toys. Consider the modern "digital dollhouse", a virtual dollhouse app for smartphones that appeared on the New York Times list of "apps to keep children happy". When you look at a virtual dollhouse, you see cartoon illustrations of families going about their business in their homes. You can imagine the characters' personalities and behavior, but the visual elements of the interaction are predetermined by whoever drew the cartoons. You can change the characters' clothes, but all the choices are conventional, like a T-shirt or dress. You can't choose, for example, to dress a character in a sea of bees, a hurricane, or electricity.

If your goal for imaginative play is to keep children happy, or at least shut them up while you drive somewhere, like the New York Times suggests, maybe this kind of imagination-inside-a-prison scenario is what you're after, but it's not what the storyhouse is for. The point of the storyhouse is to be a stage for stories, something that helps get your imagination going. Once it's going, you can take the story wherever you want.

Plans for the future

I'm thinking about how I could bring the first group of storyhouses into existence. There's a Cambridge custom woodworker in the same makerspace as Rascal headquarters who is interested in making some storyhouse prototypes that we would jointly sell as kits. We may have a demo working for the Cambridge Science Festival on April 20, 2013, or on display during the public Battlebots Challenge at Artisan's Asylum on April 21, 2013. If you're interested, drop me an email at brandon at rascalmicro dot com