Most of the robotics industry is devoted to industrial machines, like welding robots, or military robots, like the terrifying stuff that Boston Dynamics builds. Makerspaces like Somerville's Artisan's Asylum, where Rascal Micro has its headquarters, are helping to make robotics more accessible to the general public. Back in September, the Asylum started a new initiative called the Public Robotics Lab. The first project was to rehabilitate a previously-constructed robot platform.

The robot platform, pictured below, made its debut at the Somerville Maker Faire a few weeks ago. Andrew Anselmo did a bunch of mechanical and electrical work on the robot to get it driving again. I replaced the robot's brain (previously an Arduino Mega) with a Rascal and wifi router so that we could control it wirelessly. Richard Klancer, the satchel-bedecked gentleman at left in the picture, wrote a jQuery-based joystick interface that runs in any web browser. It was particularly effective on an iPad, which is what I'm holding in the picture. I enjoyed handing the iPad to people unfamiliar with robots and asking them to drive the platform around. Most everyone picked it up in 10-20 seconds. 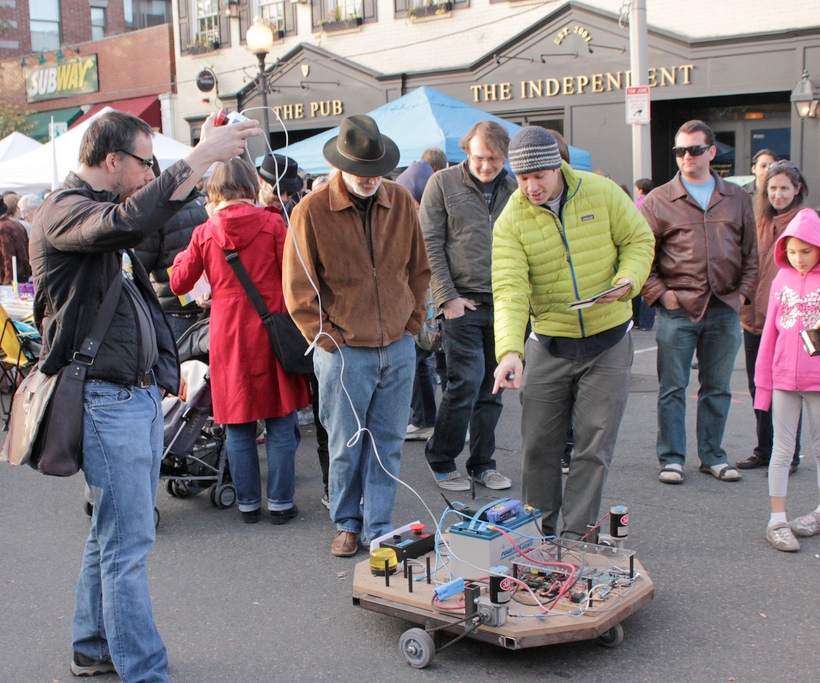 [Photo thanks to Vitor Pamplona][2] under [CC-BY license][3]

Richard has posted a video of the robot platform driving around the Asylum. The joystick control is visible around the 1:00 mark.

It's not clear what the future of the Public Robotics Lab will bring. Andrew and Kasey are working on mounting an electromechanical arm on the platform. We've also had a donation of a sweet LIDAR scanner from the open-source hardware enthusiasts at Templeman Automation. (You might know them from their open source touchtable or open source DNA replicator projects.) I've included Richard's joystick demo in the Beriberi release of the Rascal software; I'll probably continue to develop some kind of Rascal-controlled robot, but I might work on something smaller and more nimble than the current platform.